The Greatest Pen Inventions of All Time

The Greatest Pen Inventions of All Time 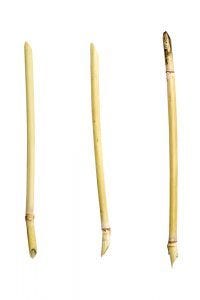 The first citing of a pen dates back to the 4th century BC with the Ancient Egyptian scribes who would write hieroglyphics on papyrus. The Egyptians didn’t favour a Parker 51, but rather a “Reed Pen”, a single piece of reed pointed into a square and split at the point. Their Inflexible nibs became blunt quite quickly. 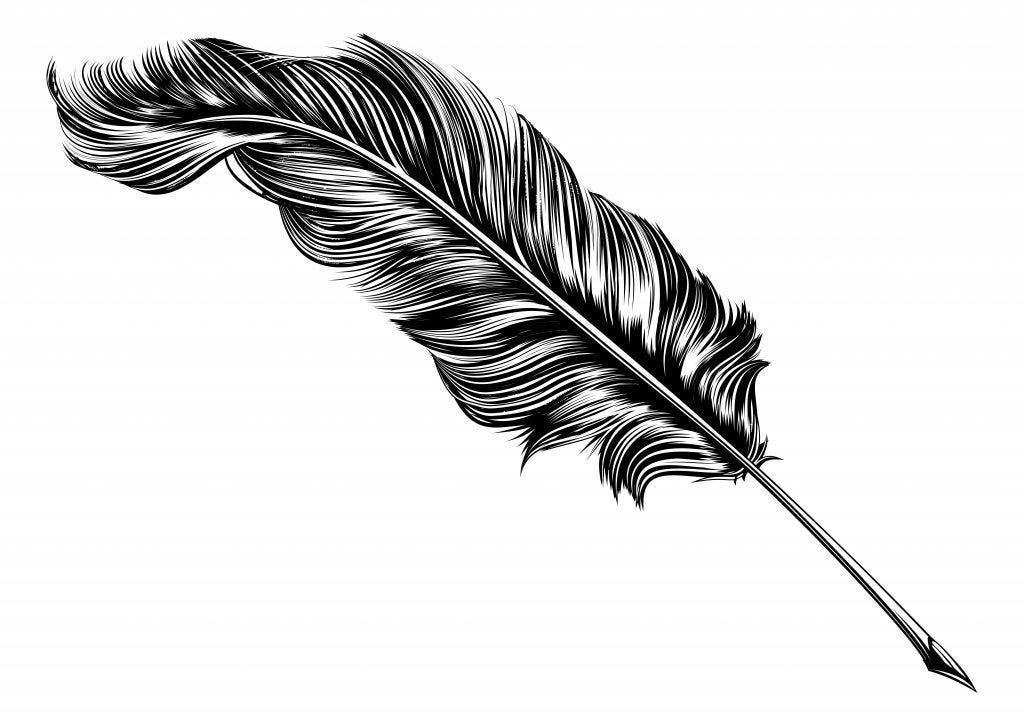 The feather quill pen, made from goose, swan and turkey, was the most popular writing instrument from the 9th century up until the 19th It was especially popular during the middle ages because they worked well with parchment.

It was a clever modification to the quill which included a reservoir of ink. German inventor Daniel Schwenter described a pen made from two quills, one serving as a reservoir for ink inside the other quill. 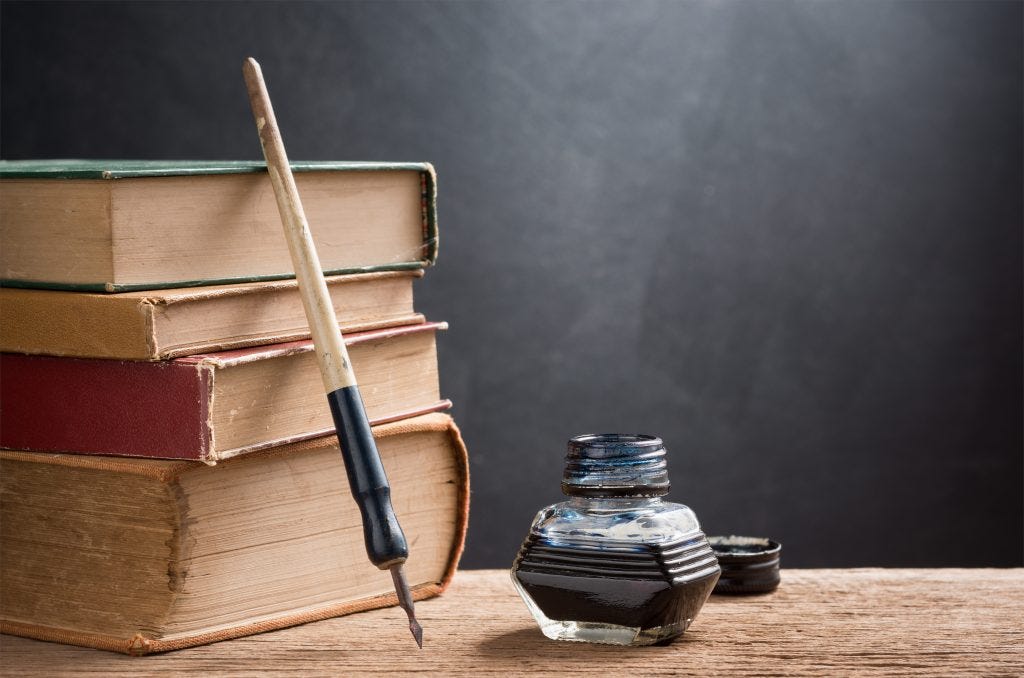 The era of the “quill” finally drew to a close end around the 1820s with the mass produced dip pen. A metal nib with capillary channels (similar to that of a modern fountain pen) is attached to a wood or metal handle. Whilst a lot of dipping is required, it offers a diverse range of mark making and can produce an extremely fine point. Some illustrators still use it.

The Birth of the Fountain Pen

So this is where we get serious, the arrival of the fountain pen as we know it. The key was creating a pen with reservoir of ink that reliably supplied the nib without leaking, scratching….

The Romanian inventor Petrache Poenaru received a French patent on May 25, 1827, for the first fountain pen. Whilst studying in France, he was so busy scribbling notes he needed an instrument that would save him time. 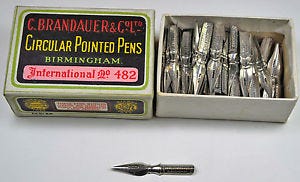 William Joseph Gillott, William Mitchell, and James Stephen Perry devised a way to mass manufacture strong and cheap steel nibs. More than half the steel-nib pens manufactured in the world were made in Birmingham by the 1850s. 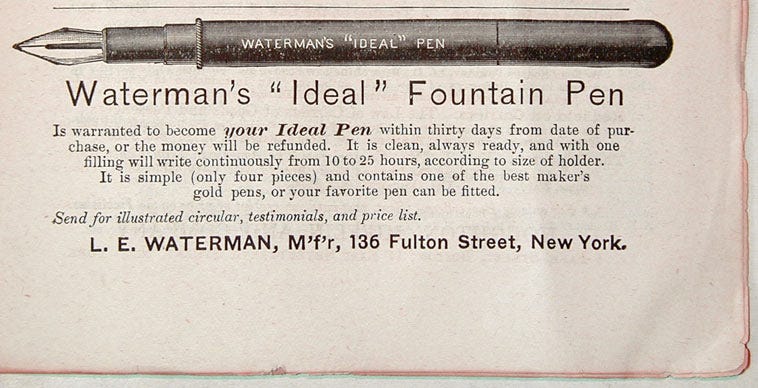 To start with fountain pens were messy and leaked! They were filled by inserting ink into the barrel wit

h an eyedropper which was also slow. The key was evolving the fountain pen

with a more efficient filling system, and trusty ink flow.

It was so successful that Parker used it for decades.

Waterman came up with an ink supply system that prevented ink overflow.

Introduced by Waterman in 1904, it’s hard to believe fountain pens went without a clip for so long!

Sheaffer added a deflatable rubber sac to hold the ink instead of using an eyedropper. A seminal moment in filling pens.

Up until this moment in pen history, pens tended to leak because they didn’t have an airtight cap. The Waterman safety pen incorporated a screw-on cap, with an inner cap that sealed around the nib. This solved the leakage problem. 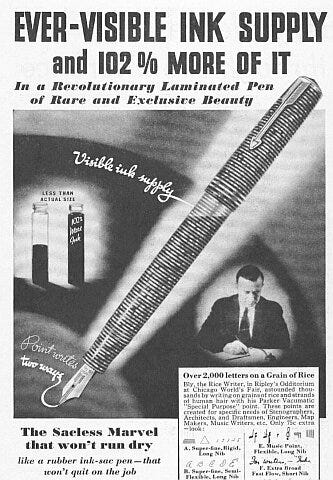 Parker developed a diaphragm that expanded into the barrel of the pen which held more ink than Sheaffer’s deflatable sac. 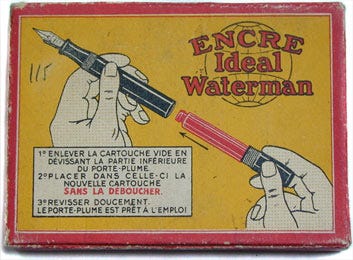 It's hard to believe our plastic frends weren’t available until 1953. Introduced by Waterman pens

Officially the ballpoint pen was invented in 1938 by a Hungarian newspaper editor called Laszlo Biro. What “they” don’t want you to know is that there were 2 much earlier inventions that nearly did it.

Invented 70 years prior to Biro’s, the ink was placed in a thin tube blocked by a tiny ball, and a wire acted as a valve. It can be credited to Alonzo T. Cross ( of Cross Pens). Nowadays it is used for drafting and technical drawing 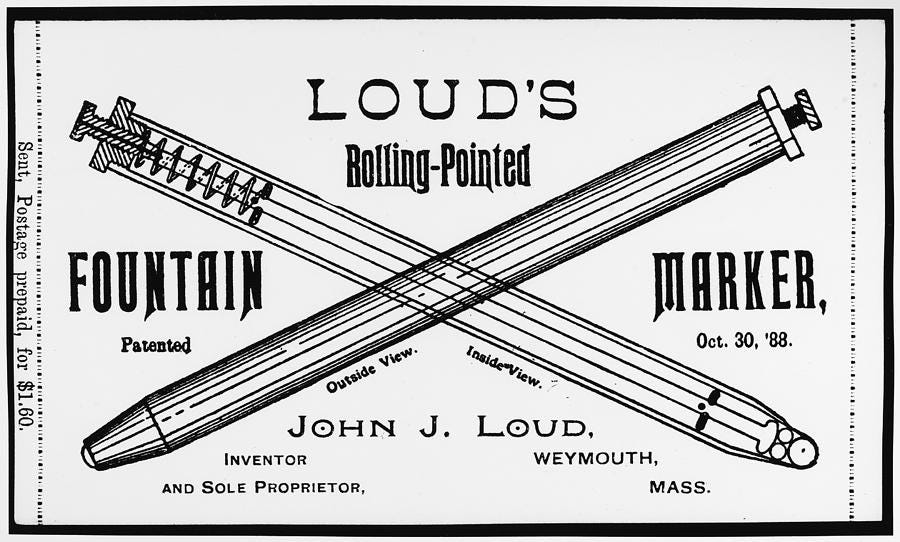 John J Loud came upon the invention when he was trying to make a pen that wrote on uneven surfaces such as wood. It was too coarse for standard paper, and the discovery went unexploited.

The 2000 completely changed the way we think about pen design, heralding an era of modernity. With its functional shape determined solely by practicality, it used a brave combination of materials such as stainless steel and Makrolon.

The moment 21st century technology was in perfect harmony with traditional writing instruments. Your smartphone device captures your note taking in real time. Your notes can then be digitally manipulated by changing colours etc, and can then be emailed. Using handwriting recognition software, your handwritten notes can be transformed into digital type. 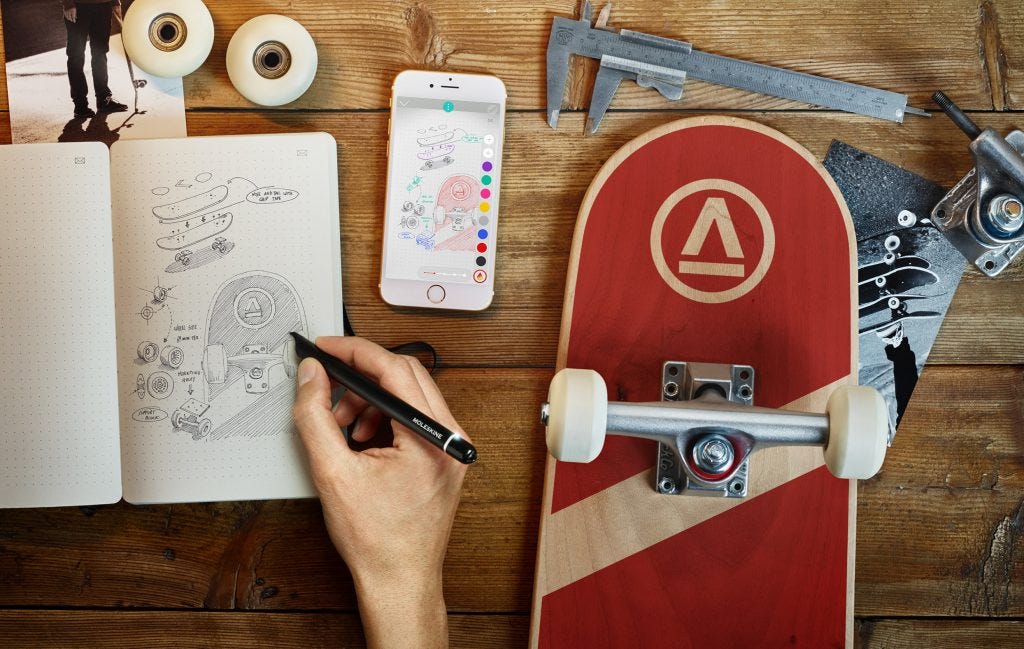