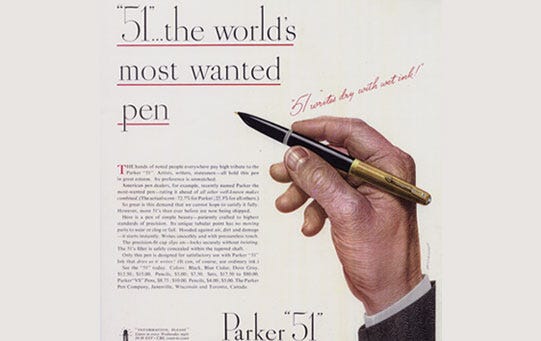 Among the oldest and most prestigious pen brands still going today, Parker has been responsible for some of the most stylish and iconic writing instruments of the 20th and 21st centuries. Known for their key technological advancements and smart designs, Parker has always been forward-looking in their approach - and having been around for over 130 years, that’s a whole lot of innovation! With this in mind, Parker has taken the decision to revisit one of their most popular designs that really helped cement their reputation - the seminal Parker 51.

Beloved by many, and an important addition to the arsenal of any keen collector, the Parker 51 represented a significant leap forward in pen design when first launched in 1941. At the time Parker was faced with a puzzle: how could they ensure their new quick-drying ink would dry quickly on the page, but not dry up in the pen itself? The answer came in the form of the 51’s unique hooded nib, which keeps the ink flowing freely while also giving the pen its distinctive aeronautical silhouette.

First designed in 1939 - Parker’s 51st year - the 51 was an instant classic, marketed at the time as “The World’s Most Wanted Pen”. Predating the popularisation of ballpoints, its sleek design was unlike anything seen before, and so was dubbed “a pen from another world”. Even today there is something charmingly space-age about its appearance that marks it out from just about any other classic design.

It’s for this reason that this year the Parker 51 is receiving a contemporary makeover - though fans of the original needn’t fear! All the key features are being retained - the hooded nib, resin barrel and jewel in the cap - but with a few key upgrades to its performance. Most notably, Parker’s modern cartridge/converter system makes refilling your pen quick and painless - much less messy or liable to leak than earlier models. In another nod to their history, the new 51 is available in six heritage colours reminiscent of the pen’s first launch. A fitting tribute to the original, providing modern functionality with a vintage feel.

The new Parker 51 is a pen made for the future with roots proudly in the past. If you’re looking for an elegant writing tool which combines contemporary performance with a bold classic design, then look no further: The Parker 51 has it covered.