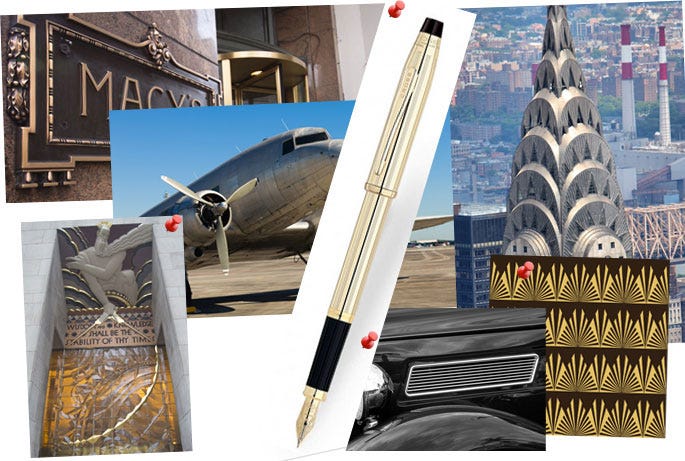 Shiny metallic surfaces, aerodynamic lines and geometric patterns are the hallmarks of Art Deco design, which can also be said about Cross Pens . In fact, An Art Deco pen was developed by Cross in 1938 (and went on sale in Bonhams recently for £1300 - £1900). Replicas of these pens were issued in 1996 to celebrate Cross's 150th anniversary. By showing the similarities between archetypal 'Deco' design and perennial Cross pens, we get a good sense of the influence Art Deco had on Cross.


Art Deco was a really exciting period of design that emerged in the 1920s, looking to new technology such as the birth of commercial air flight and automobiles. America embraced this new style, influencing many aspects of design including the emerging skyscrapers of Manhattan. Cross pens also embraced Art Deco, established close to New York at around the same time, and with a deep connection to new technology (the founders grandson, Alonzo Townsend Cross, invented the first steam engine car).

The skycrapers of Manhattan typified the streamlined forms of this design movement, towering into the sky with their impossibly long lines and technological prowess. The Chrysler building is a shining beacon at the heart of Manhattan, and an Art Deco Icon (the lobby is beautifully adorned with Deco motifs). The smooth curved edges at the summit give it the aerodynamic form it is famous for. Looking at the image comparison below, the tip of the Cross Pen has an almost identical shape (which is used in the classic Cross ranges; Townsend and Century). 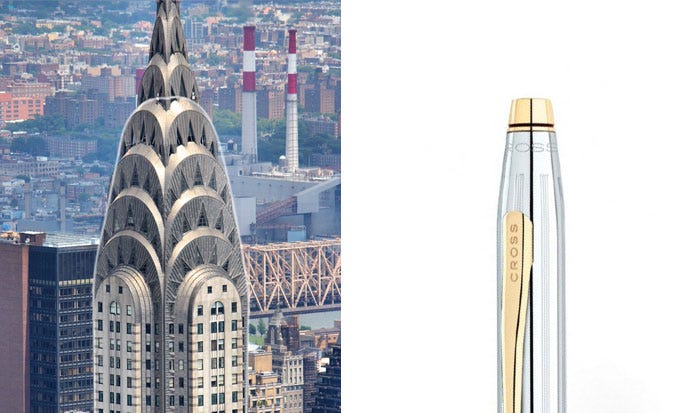 Look out for the etched horizontal lines on many Cross pens, as this was also a feature in automobile design of the time . It reflected modernity and the feeling of speed or movement forwards.

The Cross ATX, with its long soft curves, is reminiscent of car design from the '20s. Streamline Moderne, a style related to Art Deco, was influenced by modern aerodynamic principles developed for aviation and ballistics to reduce air friction at high velocities. Designers applied these principles to cars, trains, ships, and even objects not intended to move, such as refrigerators, gas pumps, and buildings. 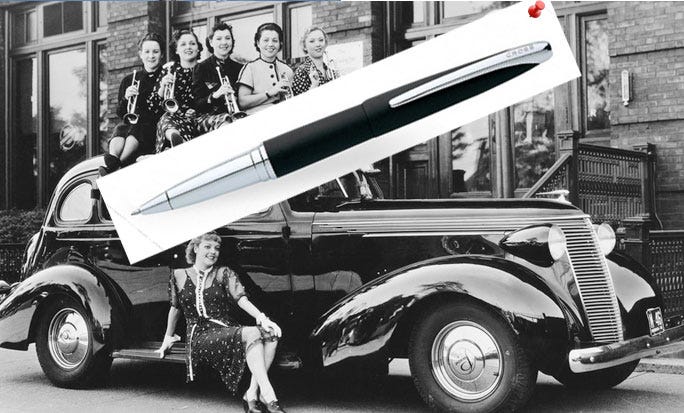 Perhaps most recognisable of the art Deco period was its penchant for shiny materials that exuded opulence, luxury and glamour. The Chrysler building shines like a beacon due to its stainless chromium-nickel steel arches and narrow triangular windows. The Cross pen range is also typified by the ultra shiny silver and gold finishes. Cross often combine silver and gold together for added excess, which they have called their ‘Medalist Range’. 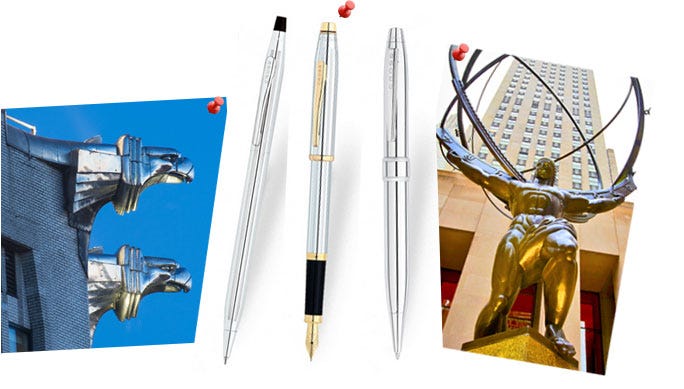 The geometric patterns typical of Art Deco were modernised versions of Art Nouveau and Folk Art patterns. The extra symmetry and simplicity injected by Art Deco reflected the bold advancements of the time. Cross have taken these patterns and used them to adorn their nibs (a very popular place for a design flourish by pen manufacturers).