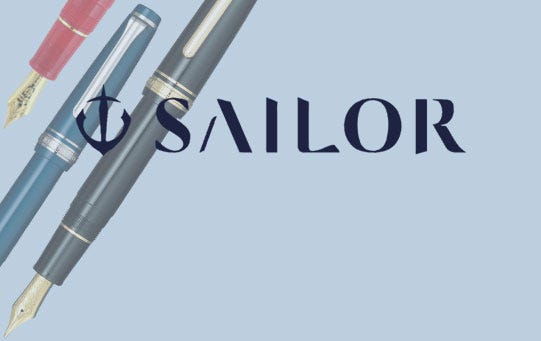 In the city of Kure, Hiroshima in 1911, Mr Kyugoro Sakata worked as an engineer. A city famous at the time for its naval port, Sakata would meet and befriend many sailors passing through Hiroshima between voyages. Returning from a trip to England, one sailor showed Sakata an artefact from his time abroad that caught his imagination - a gold-nibbed fountain pen. Struck by its elegance and functionality, Sakata was inspired, and became determined to utilise his engineering expertise to produce more of these writing instruments himself. Within months he and his brother began producing nibs for these pens in a nearby factory. Five years later, the project upscaled to manufacturing whole pens, and Japan’s first ever fountain pen company - Sailor - was born.

The name Sailor was adopted both as a tribute to the company’s inspiration, and as a kind of invocation - Sakata hoped his company would expand out over international waters and find success across the world. True to this, Sailor pens are now available in over 30 countries across 6 continents. In the 110 years since the company’s inception, they have continued to expand and innovate, developing and incorporating many new styles, techniques and technologies along the way.

For example, Sailor was the first pen manufacturer in Japan to introduce refill ink cartridges for their pens in the 1950s. In the early 60s they produced a miniature fountain pen that sat comfortably clipped to the user’s breast pocket, becoming a highly coveted fashion accessory. Then in the 1970s, Sailor developed the world’s thinnest ever fountain pen, the Chalana, which has remained popular since.

Today, Sailor is well known for their extensive variety of quality nibs in different styles, designed to allow for precision and control and particularly popular among calligraphers. Those looking for something a little more traditional should check out their 1911 series. A throwback to their most classic designs named after the year Sailor was founded, these pens exhibit the highest quality materials and craftsmanship, with a wide range of 21- or 14-karat gold nibs available. Or, for a slightly more contemporary feel that doesn’t compromise on build quality, you might want to consider their Professional Gear range, with a huge variety of colours and styles to choose from.

Crafted by self-proclaimed “pioneers of the culture of handwriting”, the tactile joy of using a Sailor pen is a truly singular experience - a legacy that Mr Sakata would surely be proud of.