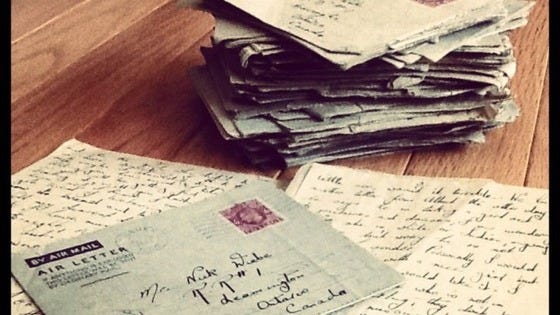 To celebrate all things handwritten, Pen Heaven decided to see if the beloved pen pal still exists in today’s tech driven world.  The perfect, age-old means of communication for getting to know someone, learning more about their culture and country, pen pals were also very popular in schools in the 60s thru to the 80s – it was a way of encouraging the art of handwriting, whilst developing reading skills and learning a new language. Catering to all ages and nationalities, we asked some long standing pen pal addicts to share their stories.

My Pen Pal who lives round the corner

‘I used to check Teletext weekly for a pen pal and still remember my first ones with a smile. One is still my friend today as we found out we lived just a few streets away. Nothing could replace the feeling I got when a letter arrived. I’d spend my pocket money on fancy stationary and pens and while away hours telling my pen pals all over the world about my life. I do think this is missing today as a mother of three, I feel for my own children who have never enjoyed this feeling, although I encourage them to write to their friends far away quite often.’ Martina Mercer, Editor, Sunday Woman

My Pen Pal from the Black Forest, Germany

‘I actually do have a pen pal. My friend Rachel and I met through a journalism/writing event (we are both writers). Our friendship grew through living near each other. She attended my Pilates classes (I’m a Pilates teacher and writer) and our eldest children were born a day apart (they’ll be 6 in December). Last year she re-located to the black forest in Germany for a great editorial job with Hugo Boss. We decided to stay in touch by writing letters, rather than Facebook messages or texts. It’s so nice. It’s still a bit of a discipline but I love receiving her letters and it seemed fitting given we met though writing. My son, Isaac sometimes includes a letter for Maya too.’ Karen Laing, Director & Writer, Fit School

My Pen Pal from New Zealand

‘I had two pen pals when I was at school, one in Tauranga, New Zealand, and one in Chicago who I remember supported the Red Sox and talked about the bleachers and cheerleading. So American! It’s funny that I remember those details but not their names! The Chicago girl used to write on coloured legal pads that I was really envious of, and added twirly flowers as punctuation. After a couple of years of regular exchanges, I didn’t keep in touch with either, sadly; I wish I had but when you’re young you can be so short-sighted and not look into a future when it would have been wonderful to have friends on opposite sides of the world.’ Shirley Blair, Fiction Ed, The People’s Friend.

My Pen Pal from South Africa

‘I actually have had quite a few pen pals in my time - before I had fibro which has caused me a lot of issues with my hands cramping I probably had around 20. One of my favourite was an elderly lady from South Africa. I loved hearing her stories she was so lovely, one day she just stopped writing, I still wonder if she is OK or if she sadly passed. She definitely left an impression on me and it just shows you can really write to anyone and make friends with them.’ Sarah Bailey, https://lifeinabreakdown.com/

My Pen Pal from Pakistan (who is also a famous actress)

‘I’ve always had pen pals and have one today as well. My first pen pal was a Japanese girl from Nagasaki – our school set up a pen pals programme and we wrote to each other and sent parcels of gifts for a couple of years. I’m not sure why we stopped writing – I think our communication was somewhat limited and a bit too staid for my liking. My best pen pal through my teenage years was my cousin in Pakistan. We still have a cache of really funny, smutty and narcissistic letters, but alas she is now a famous actress over there and her letters get pilfered so we stick to encrypted emails and WhatsApp now. My only regular pen pal now is my friend Will who lives in Manchester. He works in hospitality and so doesn’t get online much so we send each other cards, letters and gifts through the post. He’s very amusing and is also into poetry, comics and fantastically bitchy comments about terrible people so he’s an ideal pen pal. I love letter writing and have a whole chapter on it in my forthcoming book, A History of Courtship. I think if I were still single and a lad wrote me a love letter (in the way they used to when I was a teenager), I’d be completely enamoured. My husband tends to stick to single sentence texts. Oh well.’ Pakistan Pen Pal Tania O’Donnell, taniaodonnell.com

‘My first pen pal was a Chinese Canadian girl called Soufong. When I was 14-years-old I wanted to go on a school trip to Canada. But because it was so expensive I didn’t want to ask my parents if I could go, so I resolved to get a Canadian pen pal instead. I joined a special global pen pal club and they matched me up with Soufong, also 14 years old, with a wicked sense of humour and great taste in stationary. Soufong and I would always write to each other on pretty paper using a rainbow of coloured pens and smattering of cute stickers. I’d share things with Suzy that I couldn’t share with my friends at school – she was like a secret diary who wrote back! I love hearing about her life in Canada. I still have a stack of letters from our pen pal days, which went on until our early 20s. We are now Facebook friends. I’d love to meet up with Suzy one day so we could read through all our teenage scribblings and reminisce. It’s such a shame that the art of letter writing is dwindling due to social media – young kids are missing out.’ KATY MOON, Senior Writer, Spirit & Destiny

‘I was paired with a girl called Valentine, from Caen in Normandy, through my school's French exchange programme back when I was 14. I spent a week with her and her lovely family, and then she spent a week with me in Warwickshire. We hit it off immediately, and while everyone else in my class eventually stopped writing to their penpals, Valentine and I continued.   We got on so well that she regularly came to visit me in the school holidays and vice versa - I even spent three weeks with her and all her extended family at her grandmother's amazing huge country house near Lyon, the summer before my A-levels. Not only did it really help my French and her English (I went on to study it at University level), but we developed a friendship that has continued to this day. Whenever she visits London (she has an Aunt and Uncle here), we try to meet up, and my parents have even stayed at her parents' holiday home in France. Next summer, she is getting married, and my parents and I have been invited to her wedding.   We've known each other for over 25 years now. Growing up, Valentine and I always dreamed that our children would become penpals one day, and have a friendship like ours. They're still young, but roughly the same age, so hopefully when they're 14, the cycle can continue!’  Jenny Wood, Freelance Journalist and Founder of https://thetreasurehunteruk.com/ Today, there are many pen pal clubs on the internet if you feel the need to pick up this ancient art of communication and want to bring some new friends into your life.

The Greatest Pen Inventions of All Time
Writing for mindfulness