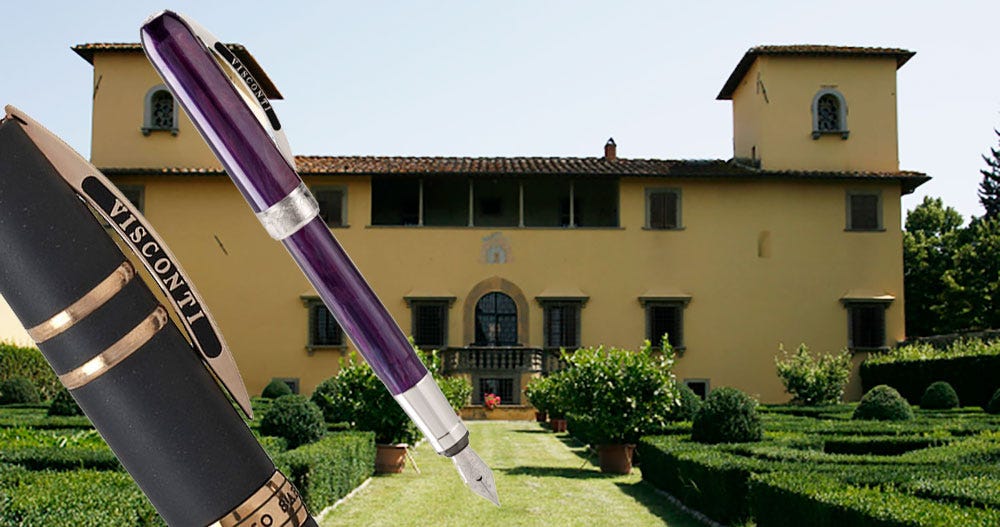 Although relatively new to the pen scene, Visconti have quickly built a reputation for creating beautiful and unique writing instruments. Their bold designs, superior craftsmanship and dedication to perfection, mean that Visconti is a status symbol for any pen aficionado. Visconti provides a range of premium pen

products which sit closely with Graf von Faber-Castell in terms of price and their superior feel. Their HRH range (Stands for Her Royal Highness - their ultra luxury range which utilises many precious materials) vies for place with the Graf von Faber-Castell Pen of the Year to be the rarest and most exquisite pens on the market. We love Visconti for their distinctly Italian styling and arty inspirations. Utilising the ever popular cigar shaped profile for most of their pens, Visconti have given this their own twist. They call this ‘squaring the circle’. Visconti brings unusual styles and bright colours to our product range, and we’re sure you’ll love the uniqueness of their swirled resin pens.

Italy, by two avid pen collectors, Dante del Vecchio and Luigi Poli, Visconti is made in the same 15th century villa to this day. The founders saw a gap in the market to create pens which had the style and craftsmanship of previous generations. While Luigi Poli has now left the company, Dante del Vecchio is still the president of Visconti Pens and works closely with the factory and designers to maintain the passion and dedication which originally brought him to pen making. Fiercely proud of their Florentine roots, Visconti promotes all their products as ‘Made in Florence’, not ‘Made in Italy’.

Visconti have set themselves apart from other pen brands through their innovations, use of materials, and most notably their characteristic design inspirations. Visconti have created a range of writing instruments

which are influenced by great people and events that shaped our world. A tribute to moments which have altered our civilisation and impacted our culture. Being based just outside of Florence has also had a major impact on their designs, as the city is well known for its strong links with art and history. With inspiration taken from the spheres of art, archaeology, philosophy and history, their pens have a cultural flair not found with other brands. From their most value friendly pen ranges; the Rembrandt and the Van Gogh, inspired by the artworks of their namesakes; through to their Limited Edition and HRH collections; with designs including The Bible, Jacques de Molay and The Declaration of Independence 1776; we love their unique style and think it brings a new life to the world of pen design.

A signature part of their brand style

is the elongated, curved clip which features on most Visconti pens. Based on the ancient shape of a Roman bridge, the sweeping form has a modern feel none-the-less. Dante del Vecchio said that the pen should be a unifying item, bringing people together through the written word and has represented this through the clips bridge design; the bridge being a symbol of friendship and tasked with uniting both people and places. Another distinctive feature of many Visconti pens is what they call ‘squaring the circle’. We love this quirky design element, where at first look the pen is circular, but upon holding the pen and closer inspection, you can see and feel many small flat edges. Not quite round and not fully faceted, the idea is to create a circle, but using a straight edge. A process which Visconti says defines them as a brand as it requires constant study and readjustment.

Visconti have pioneered several new locking systems for their capped pens, including a magnetic lock and their unusual twist lock. This uses interconnecting notches to hold the cap in place. The twist lock has a longer lifespan than the usual screw lock systems, where the threading can deteriorate over time.

‘Dreamtouch’ technology is another of Visconti’s writing innovations. While they use this term in a broader sense for many of their products, including their refills where it denotes their smooth writing style, the real innovation comes from the Palladium fountain pen nibs of the more expensive ranges. Made from the purest Palladium alloy available, 23k, the nibs are quite unique. The use of Palladium allows for finer gradients of tip to be machined and with better precision than ever before. The precious metal is more flexible than gold and over the years will mould to your individual writing style. Palladium is also very resistant to corrosion so will weather many years of use and become a lifetime writing companion.

Palladium isn’t the only unusual material Visconti use. Many precious metals and gem stones are used in the creation of the HRH and Limited Edition ranges, including sterling silver, gold, marble and diamonds. Their distinctive Homo Sapiens range is crafted from basaltic lava

, mined from the fields surrounding Mt. Etna. This exceptional material has never been used to make a pen before and creates an imposing writing instrument. The material while difficult to render into a workable pen, reveals a rugged natural finish that exudes an understated luxury once complete and bestows a sturdy, almost indestructible quality on the pen.

Most significant though is the use of Celluloid as a pen material. Previously used and discarded by many pen brands over the years, Visconti has rediscovered the joys of this unusual material and, despite the difficulties, relaunched its usage in pen production. Celluloid has been a pivotal material for the Visconti brand as it showcases the brands attention to detail and pursuit of perfection, due to it being so difficult to work with. To craft the celluloid takes many months (approximately 4-8) and it can be spoilt at many points along the way. To produce using such a temperamental material really is a labour of love.

“We want our pens not just to be functional, we want them to be precious too” - Visconti

Their unique use of resin is also notable. While many other pen brands, including Laban and Parker, use resin in some of their range, they do so in single or limited colour palettes. Visconti have taken the use of colour in resin to a new level through the Van Gogh range, utilising a wide mix of colours to mirror the painting they portray. As this resin is mixed, the colours become swirled and so each pen made becomes an individual and bespoke writing instrument. Many of our customers ask us to provide photos of the pens so that they can choose their favourite mix of colours.

Win one of Visconti’s best selling pens, the Van Gogh Portrait in Blue Ballpoint Pen by answering this simple question:

What does the shape of the signature Visconti clip symbolise?

This competition is now closed!

Our winner is Sophie from Bangor, UK

T's & C's Prize includes 1 x Visconti Van Gogh Portrait in Blue Ballpoint Pen and worldwide standard delivery. Competition closes Midday (GMT) Friday 28th July. Winner will be selected at random from all correct entries and announced on Monday 31st July. 1 entry per person. The prize is as stated, is not transferable and no cash or other alternatives will be offered. The winner will be responsible for any expenses and arrangements not specifically included in the prize. All standard Pen Heaven terms and conditions apply.