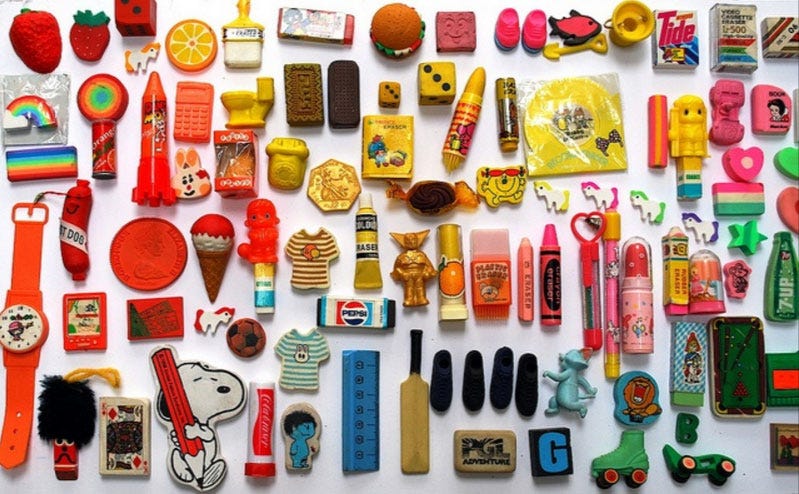 With new technical gadgets introduced every month, we are taking a moment to celebrate truly iconic retro stationery by introducing a top ten list of the best items from the 80s and 90s from sweet-smelling rubbers to feather pens. 1. Parker pens - You wrote with PENS (shock horror!). More specifically? A Parker fountain pen. Owning a Parker was a sign of status in the 80s/90s; every cool kid had one and every other kid wanted one. Still a big-seller, we have a whole range of Parker pens to covet, such as the five-star Parker Sonnet Cisele Fountain Pen – an ageless classic with a 23k gold trim. [caption id="attachment_1489" align="alignleft" width="190"]

image source: The Works blog[/caption] 2. Novelty pencil cases - If pens were statements, let’s not even get started on pencil cases. If you couldn’t keep your pens in a Walker’s crisps novelty pencil case, then what was the point? 3. The push-up pencil - The most annoying invention known to man because it was inevitable that you would lose or break one piece and the whole system would break down. And yet, you just kept on buying them. 4. The Filofax - The super-organised loved this; it had a calendar, a map, space for your club (and Pokémon) cards, a plastic ruler and…it looked amazing. The Filofax has stood the test of time and is still a precious organiser for professionals across the globe. Adjusted for the 21st century, it now comes in classic leathers and some are big enough to fit your iPad. There’s also a range of colours from subtle black and brown to the fluorescent pink featured in the “Original” design, tastefully decorated with a branded popper (£58.50). 5. Scented rubbers & Scratch n Sniff Stickers - It was completely appropriate to spend an entire class sniffing your scented rubbers and stickers; strawberry, banana, apples, even Coca Cola. There was always someone who took it too far though and had a little lick! [caption id="attachment_1491" align="aligncenter" width="264"]

image source: Foodiggity[/caption] 6. The pad-lock diary - You had to have one, mostly so your siblings wouldn’t read about your crush on Nick from Backstreet Boys or your obsession with Baywatch. The only problem was, you could never find the key. 7. Crayons - You begged your mum to get the biggest pack, the one that had over 96 different colours. She bought it and you spent hours doodling through class until you broke all of them, one after the other…and you begged her for new ones. It was a vicious circle. 8. Fruit-scented ink See scented rubbers above. No further comments necessary. [caption id="attachment_1492" align="alignleft" width="270"]

image source: Hello Giggles[/caption] 9. Pencil toppers - The ultimate stationery accessory, pencil toppers let you show the world your mood. Trolls with colourful hair-dos were a classic and a Pen Heaven favourite (especially the green one!). 10. Gel, glitter and feather pens - Whether you were channeling Cher from Clueless with a pink feather-topped one or glamming it out with dazzling glitter gels, a pen wasn’t just a pen in the 80s/90s. It was a personal statement. “Many years ago…before people obsessed over computers, tablets and mobile phones, it was popular to have the best of the best in stationery. We revelled in the extensive choice of colourful, quirky and downright amazing pens, rubbers, pencil cases, books and diaries. Although technology is a brilliant invention, these retro items bring back memories in a way a laptop could never do – they were silly, fun and personalised. My personal favourite? The wind-up sharpener from art class.” – David Cole, Pen Heaven

A Valentines Text Just Isn’t the Same
Which Handbag Shall I Wear with My Pen?