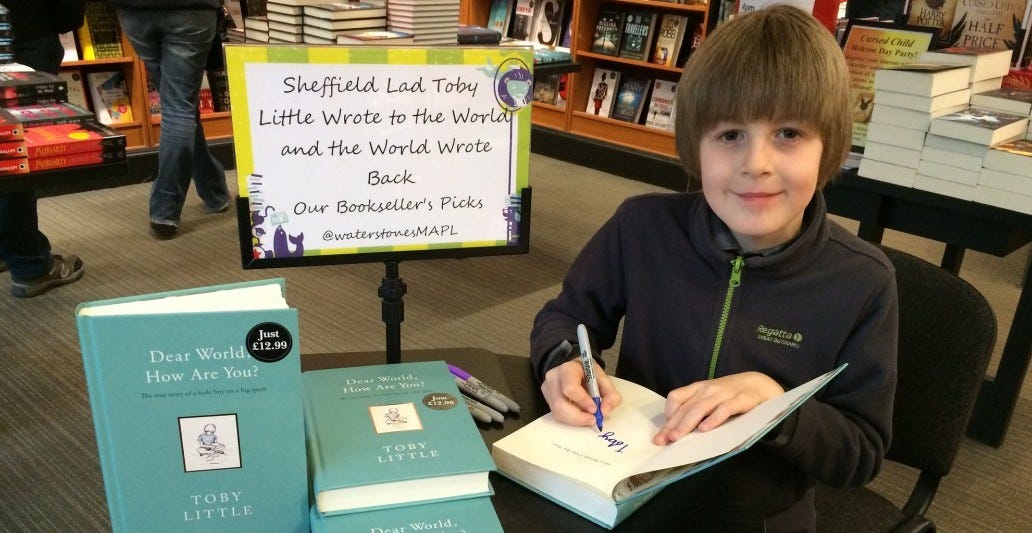 In June 2013, 5-year-old Toby Little was walking to school. Inspired by a children's book (A Letter to New Zealand, by Alison Hawes), he asked his Mum if he could write a letter to New Zealand, followed immediately by the question whether he could write a letter to every country in the world. Over the summer, Toby began writing - first to family friends, then to friends of friends, and finally to complete strangers, as the story of his project made it around the globe. Nearly three years later, Toby, now 8, has written nearly 850 letters to adults and children around the globe, asking carefully researched questions about their lives, local places of interest, customs, food, school, and hobbies. The responses show not only that the world is full of kind-hearted and amazing people, but also the more we learn about each other, the more we care about what happens to the world and its inhabitants. In March 2016, a collection of Toby's letters, and the responses, got published by Penguin in a book called "Dear World, How Are You?", and his Facebook site has grown into an online community, frequented by individuals, families and schools keen to learn more about the world and joining Toby's journey. What makes a bunch of hand-written letters so powerful? Pen Heaven asked him to tell us more…

Lots of letters from Toby to the world.[/caption]

I think I wanted to do letters because letters are more special than emails. Emails will just come back straight away, but letters, you can think about what people might say while you wait for the reply. There's also paper, envelopes, stamps, handwriting - I have a letter from Bhutan where the envelope is made from a daphne plant, we had to look that up! One letter was written on banana paper, and some people send little drawings, too. We couldn't agree more with Toby's comments on handwritten letters being more special than digital communication. If you're interested in getting back to basics or want an insight into how the UK feels about traditional letter writing, visit our blog post.

Are they all handwritten?

Do you prefer handwriting or typing? Why?

I prefer handwriting because I cannot type, but also, my handwriting has changed over the years, quite a bit. When I started writing letters, I was all over the place, but now, I can normally keep my words straight. My first letter was just two sentences long and took nearly an hour, but now, I can do joined-up writing, and I have my pen license at school. It's been great for spelling practice, too! [caption id="attachment_1574" align="alignleft" width="188"]

Toby sending a postcard whilst in Morocco.[/caption]

Do you have a favourite pen, pencil, product?

No. I like being able to rub out what I have written, in case I make a mistake, so I usually write in pencil, but I also have some Pilot Pens that you can rub out. Now I'm getting older, I make fewer mistakes, so more letters are written in pen. When I started, I used any kind of paper, but now we print our own letter-writing paper, so people know that the letter is from me. I like using colourful envelopes, to make people smile when they see my letter arrive.

What has been your favourite/ most memorable response?

I have three favourites, Lebanon, Michigan (US), and Antarctica. In Lebanon, a newspaper team mocked up a front page of their newspaper, and each person took one of my questions and turned it into an article. In Michigan, I wrote to Melissa, who works at the Henry Ford Museum. She sent me a long reply, and we actually met her about 18 months later, and I got to sit on Rosa Parks' bus. And James does research at the South Pole - he told me all about his research, and even sent me a Happy Birthday Toby banner, because I wrote to him just before my 6th birthday. But really, I love all my responses. I like writing to everybody, because people tell me what their lives are like, so I'm learning a lot about the world. Some letters are special just because of the super-long journey they had! [caption id="attachment_1575" align="aligncenter" width="500"]

What is next? Your ambitions?

I think I'll just carry on writing. When I'm a grown-up, I might want to be a travel writer, or a film maker, because I love making films, too. Or maybe an actor, or making documentary films, telling people about amazing places in the world. I still have ten years at school left!

We believe learning to write is a vital life skill, you clearly enjoy it, can you tell us why?

You can communicate with people nicer than on the internet. I love reading, too, and for people being able to read, somebody has to write something for them to read. I also like how different languages look like written down - I'm learning Chinese, and writing Chinese is completely different to writing English. I often ask people to write a little bit in their own language, like "My name is Toby", for example, and I sometimes try writing in other languages, too - it's fun!

You are very young to have a book published (Dear World, How Are You?) - can you offer tips and advice on others wanting to follow in your footsteps?

I never planned on writing a book, so it was a big surprise when I was asked by Penguin. So I don't think I can give any advice. But maybe, just do what you love, and don't give up. I don't think you start doing something because you want to have a book published, that might just be an accident later. But now, people are getting in touch saying they have read the book, and it has inspired them to explore the world, and that is just so cool! [caption id="attachment_1576" align="aligncenter" width="625"]

Toby signing copies of his book; 'Dear World, How Are You?'[/caption]

Spring Brights - Freshen up your Stationery this Spring
Winner of our "I Love Stationery Because..." Competition