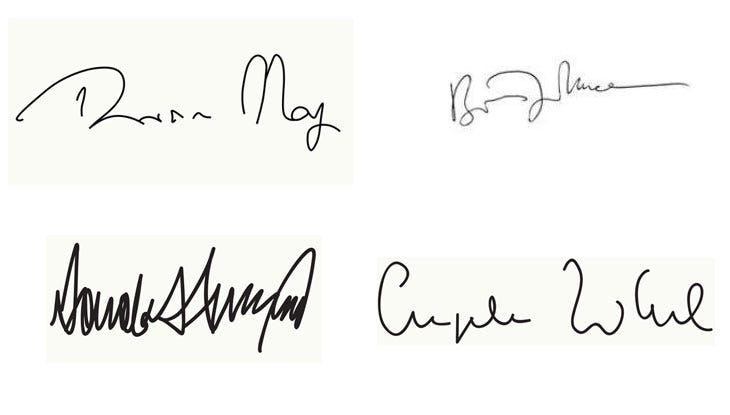 Signatures are like the wax seals of yesterday.  They are our ‘brand’ that we put on letters and legal documents.  Signatures are a free personal mark, unbound by a need to be legible. In that sense, they are highly personal, and symbolic of the public image we present to the world.  It is fascinating to see how a signature differs from the handwriting itself.  Is the writer different in private compared to the image he wants to portray? That is why it is fascinating to analyse handwritings and signatures of the famous, especially politicians.  Is their inner personality flawed, and can we trust what they say in public? While we cannot come to definitive conclusions about personality with just one sample, without seeing the original handwriting, one can see themes that would be explored in a thorough handwriting analysis.

For someone so famous, there are surprisingly few examples of Theresa May’s handwriting in the public domain.  Her signature, like her writing, seems to have been done at high speed, reflecting a highly active, restless mind.  Her signature is similar to her writing, but with a little more zip to her public image.  The large, curve of the capital ‘T’ in her signature is like a roof protecting her from the slings and arrows of public life.  Her handwriting has further signs of distrust of the outside world.  Slightly ‘discordant’ forms often point to an uncertain self-esteem in the past, which is compensated for in adult life by ‘getting things done’ and achieving goals.

Donald Trump.  Oh my word!  I am not surprised that his signature and writing has caught the public’s imagination.  The overblown, angular, aggressive-looking signature tries hard to present an image of strength and virility.  He tends to use both capitals and thick felt tip pens which often shows an unconscious desire to appear stronger.  Other handwriting samples from his past show the ‘systemisation’ of handwriting forms.  This type of writing, along with other signs, can indicate inner anxiety that is transformed into arrogance and superiority, with a tendency to project blame onto others.  This intransigence coupled with a lack of objectivity could be a weakness to be exploited by political opponents.

With Boris Johnson, the signature (the public i mage) is bigger and more flamboyant than the writing itself.  This indicates someone who is at home on the public stage, who enjoys both limelight and leadership.  In private may lurk a quieter person who enjoys the intellectual side of life.  Small, spider-like scrawls often reveal a sharp intuition that senses what is going on in his environment.  A possible weakness in this type of writing relates to the realm of feelings and emotions, which some men are not comfortable in.  The cerebral and intellectual worlds are less of a minefield!

Angela Merkel’s handwriting and signature are very different to the other politicians.  The stroke and forms exude personal warmth and a down-to-earth practicality.  The signature is very much like her writing, indicating no difference between what she presents to the world, and her private self.  The simple, rounded forms are typical of those eager to work in a team rather than grab the glory for themselves.  The steadiness and solidity of the forms and their direction belongs to receptive types who are ‘happy in their own skin’.  This writing seems to indicate a ‘good egg’: trustworthy, reliable and grounded.  It is hard to believe that she is a politician!

Martin conducts handwriting analyses to help people understand themselves and others through their handwriting.  Graphology can be used for a variety of purposes, for example: recruitment, personal development, team dynamics and career development.  To find out more, visit insightgraphology.co.uk For further handwriting analysis, read our post on the British election candidates back in April 2015.
Colour A Day
Back to Black