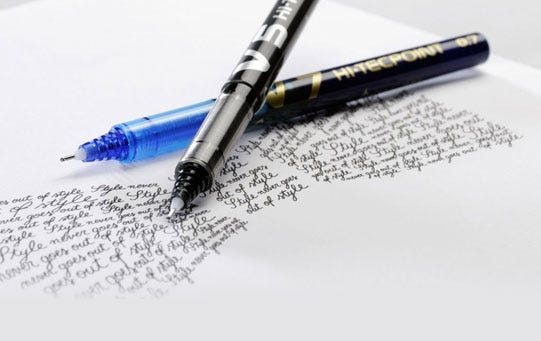 In the UK we are familiar with a whole host of Japanese brands known for cutting edge technology and innovation. Ask anyone and the names Sony, Toshiba, Nintendo or Mitsubishi would likely trip off their tongue. Perhaps unknown to them, however, they’d likely be neglecting one of the most inventive, influential and ubiquitous brands of the 20th century: Pilot.

Pilot started life a little over 100 years ago, in 1918. As Western influence worked its way across the globe, many in Japan were finding traditional penmanship and Japanese writing insufficiently “modern”, and incompatible with this new world of international trade. Savvy entrepreneurs responded and the country saw a boom in pen manufacturers determined to employ innovative new techniques and technologies to push the country forwards.

Today, Pilot is one of the only companies in the world with the capacity to facilitate every single step of a pen’s creation, from initial research and development all the way through to manufacturing and distribution. All this is to say: these guys know what they’re doing! They are also a brand committed to their heritage and core values – in fact, still central to Pilot’s ethos is the Five Guiding Principles on which it was founded, directly informed by founder Ryosuke Namiki’s background as an engineer and professor at the Tokyo Merchant Marine College.

All of this creates quite an image to live up to! So what exactly are they offering? Thankfully, as our range shows, Pilot is a brand that always delivers on its promises.

Asking to borrow a pen from a colleague, expecting a Bic, and instead finding one of these between your fingers, is a genuinely joyful moment that I don’t doubt many of us have experienced. Yes, they’re inexpensive and ubiquitous, but their quality and durability is inarguable, and Pilot’s V-system ink regulator ensures perfectly controlled ink flow from the second the pen touches paper down to the very last drop. Coming in a range of writing types, tips and designs, choose V-system for a reliable workhorse of a pen that belies its low-cost price-tag.

Clumsy? Messy? Accident prone? Thankfully, the FriXion range provides a solution for those of us who don’t trust pencils but trust our own spelling even less. Remove slip-ups and errors from the page without the mess of an ordinary rubber with Pilot’s innovative thermo-sensitive ink, which reacts to the rubbing effect without generating eraser dust or leaving behind unsightly marks. Good luck, Staedtler – a worthy challenger has entered the ring. 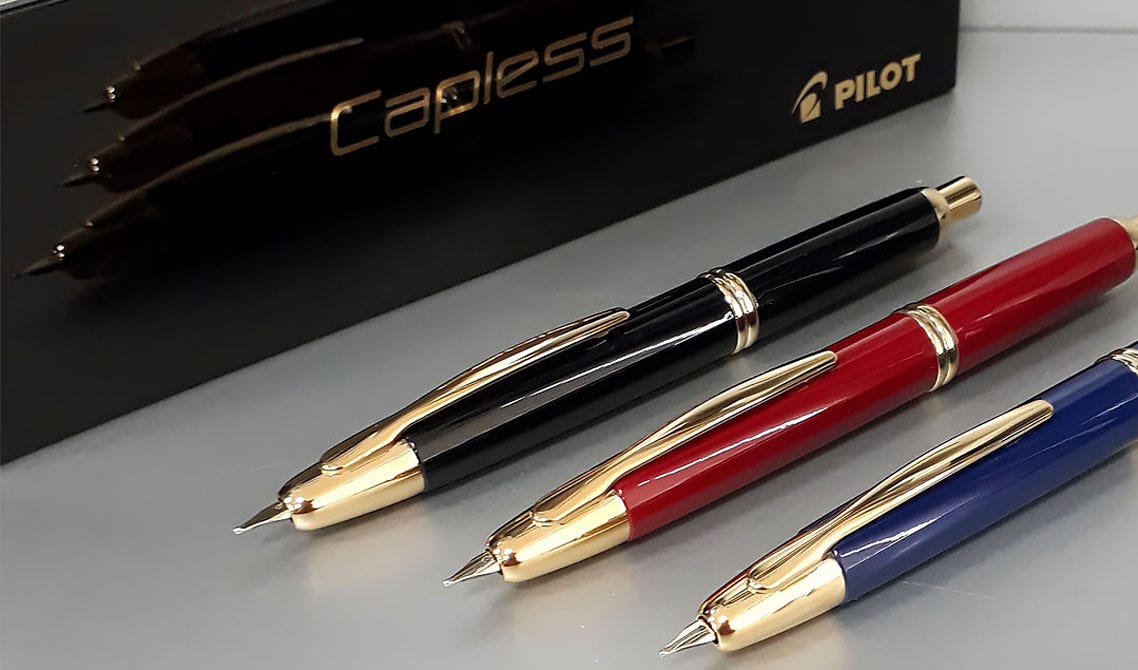 Losing the cap to your favourite pen is a heartbreaking experience I wouldn’t wish upon my enemies. Pilot’s answer comes in the form of their Capless range: fountain pens with retractable nibs, safely shielding themselves from dry-outs or leaks by ensconcing themselves in a sealed chamber at the press of a button. Problem solved.

In 2006 Pilot turned their attention to the issue of environmental sustainability. They came up with the B2P range, or Bottle2Pen, which are made entirely from recycled plastic water bottles. All B2P pens are refillable, further cutting down on waste, and come as ball point or retractable gel pens. Just one 1.5l bottle can be turned into five B2P pens, and since their launch over 7 million plastic bottles have been recycled by Pilot. (We’ll let you do the maths.)

You’d think designing and manufacturing such an extensive range of expertly crafted pens would be enough, but we know from their Five Principles that Pilot won’t rest on any laurels. In fact, in addition to their writing implements, Pilot’s inks are amongst the most well-renowned in the world today. In particular we would guide you toward their Iroshizuku range, inspired by the natural colours present in the most exquisite of Japanese landscapes – surely an irresistible prospect to any fountain pen fan.

There are few objects as important to our everyday lives as the humble pen – thankfully, Pilot is a brand that has never forgotten this. Having dedicated the past 100 years to ensuring excellence in all of their products, their innovative designs are a joy to use and won’t break the bank. All aboard!

Revive a dead ballpoint pen with these 2 simple tricks May 24, 2012
Latest