Love Poetry: How to Write Haikus

Love Poetry: How to Write Haikus

Poetry and Valentine’s Day go hand in hand. What better way to express all of your passion and romance than to write a poem for a loved one? Rather than giving in to a Hallmark card, get creative and write a Valentine’s Day haiku. Few forms can boast the potency and succinctness of haikus. We look at what they are exactly and how to go about writing one.

Haikus slowly evolved from other forms of Japanese poetry, stemming as far back as the 1100s. At this time, short form poetry (known as tanka) grew in popularity over longer forms (known as choka). The most popular form, the renga, was made of three lines consisting of 5, 7 and 5 morae (sounds or syllables), followed by a couplet of seven. This form was initially only used by Japan’s elite, but by the sixteenth century, eventually became used in a more satirical and comedic manner by regular citizens, who named it haikai.

The initial 5-7-5 triplet was known as a hokku (literally meaning ‘starting verse’), and only started to be used independently and in a serious tone by the poet Matsuo Bashō in the late seventeenth century. Focussing on the concept of karumi (feeling lightness), Bashō wrote the earliest forms of what we today call haiku, which was coined by Masaoka Shiki in the 19th Century.

Haikus started to influence Western writers such as James Joyce and D. H. Lawrence at the start of the 20th Century. R. H. Blyth published the first of a four volume work simply titled Haiku in 1949 and their popularity continued to grow in English speaking countries, attracting the attention of members of the Beat Generation poetry movement, such as Jack Kerouac and Allen Ginsberg. By 1989, three organisations joined to form the Haiku International Association to connect those wishing to explore, study and appreciate the art of haiku.

Greetings cards are nice, but who can really say they identify with the ‘catch-all’ work that hundreds of other people across the country will receive too? To get everyone is the Valentine’s spirit, we asked top calligraphers to create some beautiful Valentine’s haikus: 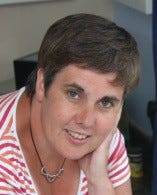 Janet Smith, owner of Oakleaf Calligraphy, penned this lovely poem for us with a Lamy 2000 pencil. We love the simple inclusion of the heart at the heart of the haiku, as well as the shading that makes the lettering come off the page. Janet has over 20 years’ experience with calligraphy, attending the Society of Scribes and Illuminator Advanced Training Scheme, and promotes her work over at oakleafcalligraphy.co.uk 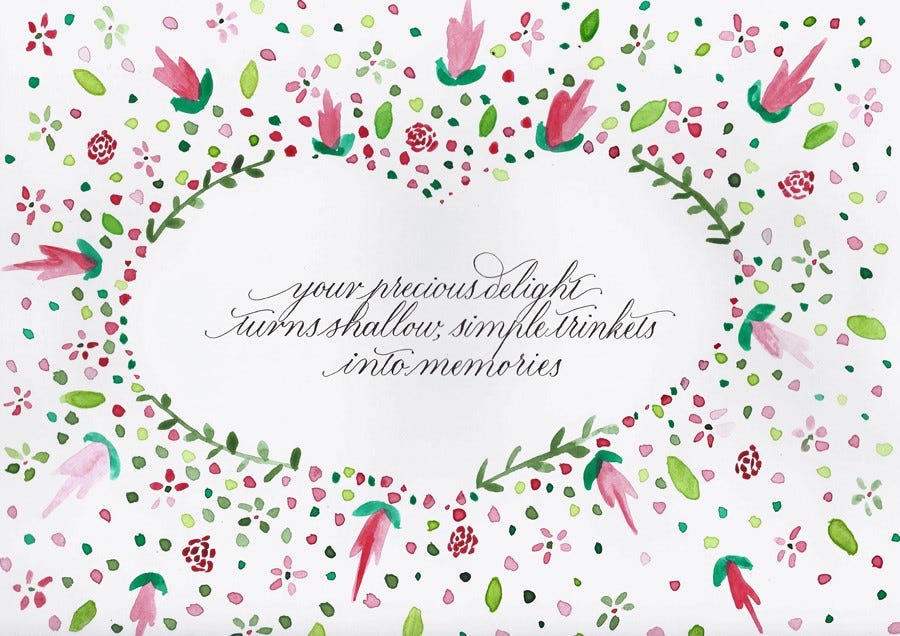 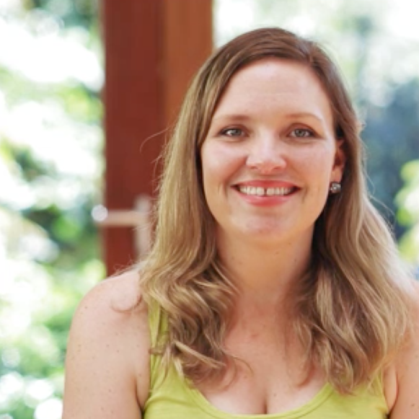 Kate Watson from Olive and Reid created this beautiful piece around a haiku that highlights the importance other people give to our lives. Kate covers writing and craft fairs, special workshops and, showcases her own work at oliveandreid.com 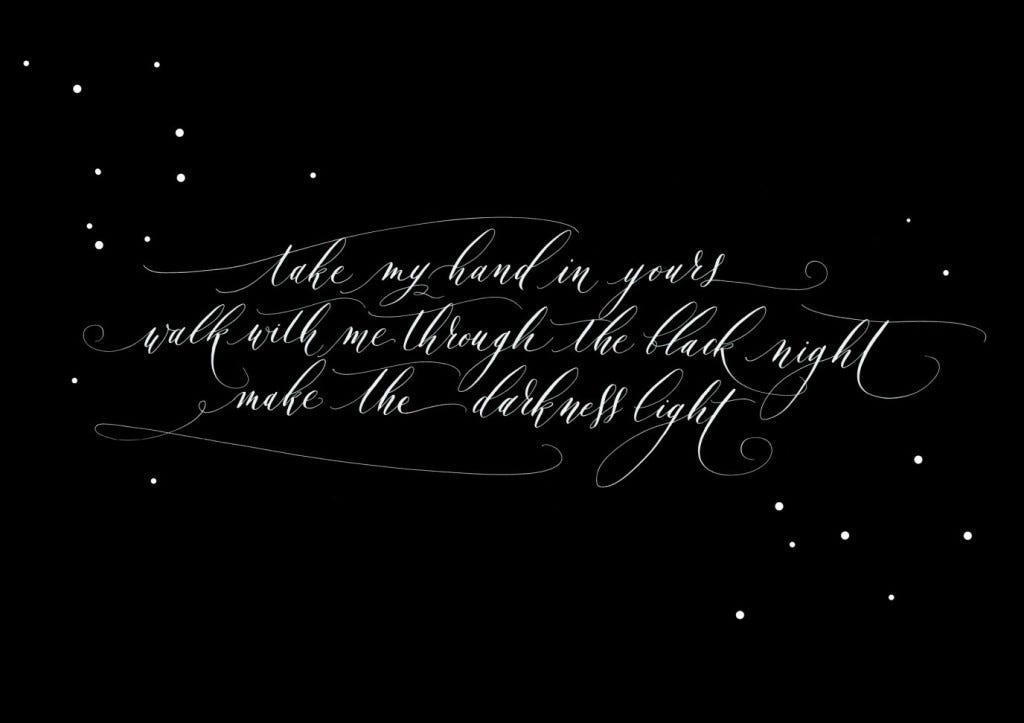 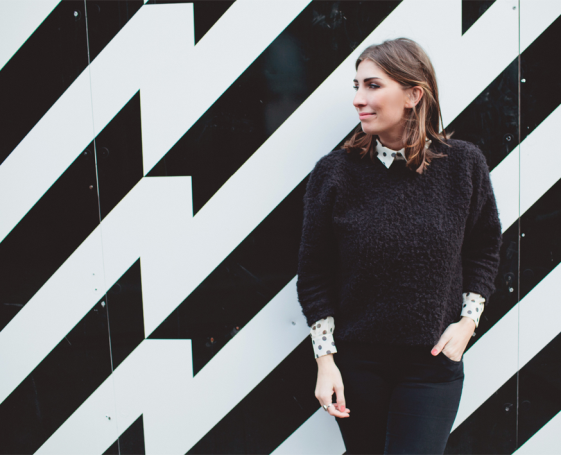 Chiara Perano of Lamplighter London created this poem, juxtaposing the uncertainty of darkness against the clarity and guidance of light. She also created a juxtaposed version of her calligraphy, which is below. Working for seven years in the design industry, Chiara founded Lamplighter London in 2012 and has taken it from strength to strength. Find her work over at lamplighterlondon.com 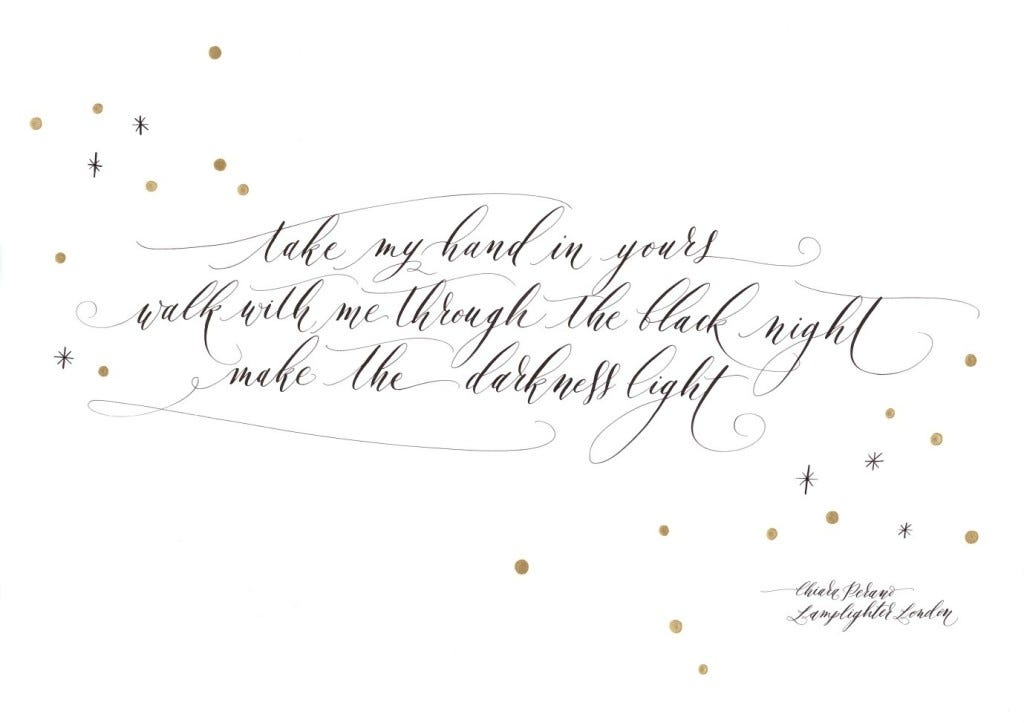 Construct your own Haiku

Rather than placing emphasis on a rhyming structure, haikus have a fluid core of rules that have changed over its rich history time. As the poems have permeated different cultures, certain rules have been adopted or changed, though haiku from its origin had three key components:

As previously mentioned, morae are the phonetic units used in haikus, with a set number used per line of the poem. An opening line of 5, followed by one of 7 and closing with another of 5.

In order to try and mimic the Japanese style as closely as possible, many English-written haikus stick to the 5-7-5 format. Far less demanding than a lot of other poetry forms, haikus do still test you. You’ve only got 17 syllables to work with, so words are at a premium, but this creates a concise poem when you’re done.

Kiru (cutting) refers to the use of juxtaposition in the poem, wherein two images are set against each other. This can be done to enstill a sense of purpose in something commonly seen as trivial, or compare aspects of something natural with that which is man-made.

3. Relate to seasonality, emotion or nature

Kigo (season word) is a word that relates the haiku to a particular seasonality, such as varieties of animals or flowers. Depending on the writer of the haiku, the kigo can vary greatly, as wildlife and customs naturally vary across different cultures.

When the two aspects, Kiru and Kigo, are brought together, you can see the sensory nature of haikus, as they highlight seemingly simple aspects of the world around us and present new reflections on them. Some haikus are deliberately vague, allowing the reader to draw their own meaning and spirituality from them.

As the driving theme of the haiku is romance on Valentine’s Day, the seasonality of the poem is naturally inferred. You can also achieve a sense of kiru by incorporating memories shared by you and your loved one into a more personal message you can share. Perhaps a silly in-joke that always makes you smile, or the music playing on your first date that you’ll never forget.

What is your Valentine’s haiku? Is there a famous haiku that you know by heart? Why not share it with us @Pen_Heaven

Letters Still Have A Place in Our Hearts
Top 5: Reasons to Use a Fountain Pen