Forever misplacing your pen? Or what about your phone? 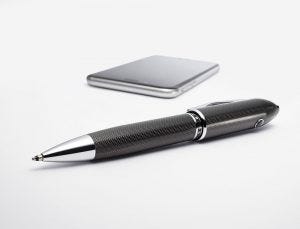 Having recently released a range of trackable writing instruments, Cross have sought to address this common ailment of the modern world. The products, manufactured in conjunction with TrackR technologies, contain a tracking device enabling what is lost to be found. It works via a smartphone app, which when downloaded uses location data and Bluetooth to connect to your writing instrument; logging its movements or signalling the pen to make a noise and indicate its position.

With a Bluetooth range of up to 100ft (30m) and the ability to set automatic alarms when the device and phone become separated, you’ll be able to say “Found it!” much more regularly. There’s also a way to keep an eye on your device if you’ve gone out of Bluetooth range which I’ll cover later.

The range currently consists of the Peerless TrackR Ballpoint Pen, available in Quartz Blue or Carbon Black, which has an inbuilt tracking device in the upper part of the pen body, and the Cross Calais Ballpoint Pen & TrackR Pouch Set, available in Matte Black or Satin Chrome, which features a TrackR ‘chip’ and handy travel pouch; slip the chip into the pouch pocket with your pen, keys, money etc.

We were super excited at Pen Heaven to get our hands on the Cross TrackR after hearing all about it and what better way to get to know it, then put it to the test. 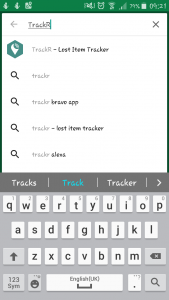 We opted to test the Peerless TrackR ballpoint pen, where the tech is “all-in-one”. Styled on the enduring Cross Peerless, the pen has a broad profile and heavy, yet balanced feel.

The pen uses Cross Micro Ballpoint Refills (available in black, blue and red) due to the TrackR device being inbuilt to the top half of the pen. Whilst smaller than standard ballpoint refills, the ink is the same smooth Cross ink and you’d be hard pressed to notice a difference.

Downloading the smartphone app was simple. I use a Samsung smart phone and am forever finding that a lot of apps I want are not available on Android; however the TrackR app is available on both Android and Apple. Perfect!

The app was easy to find, and downloaded quickly. A simple to follow step by step procedure for connecting the ‘device’ to your smartphone is outlined in the manual that comes with the pen, but even without, the app spells it out for you. 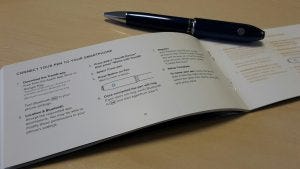 When connecting, the pen makes a series of noises indicating process and then success. Upon successful connection I was presented with a map, which accurately showed my pen’s current location.

I set up a few quick fire tests for the trackable pen to put it through its paces before I set to using it in the real world. 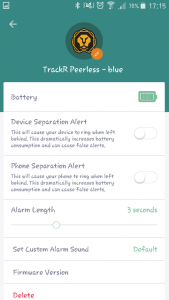 Separation alarms can be set up to go off if your pen and phone go out of Bluetooth range of each other. You can turn on and off each alarm independently (there’s one for your device and one for your phone) and there’s even a choice of alarm alert length and customising the alarm noise. Sounds great! However, there is a warning stating that these alarms can significantly decrease battery life and may cause false alarms.

I set up a separation alarm on the pen and walked off. In the busy Pen Heaven office, once out of range and the alert went off I found it hard to hear – not exactly helpful in reminding you that you’d left it behind.

Whilst this may be a good feature for extremely forgetful people, I found the warning about battery life a turn off and would just use the basic TrackR functionality instead.

To test the Bluetooth enabled location functionality in a confined space I played a game of hide and seek. Asking a colleague to hide either the pen or phone in our warehouse, I went hunting. 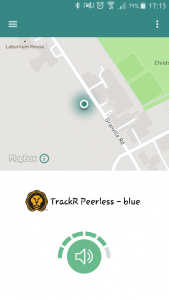 The trackR app on the phone has a large green button to tap and start the process, a distance indicator shows how close your Cross TrackR pen is. The distance of Bluetooth was a little limiting – the pen became disconnected and I had to wander aimlessly until I reconnected with the device and could use the search function; however, if I had considered leaving the separation alarms on I should have seen this coming…

Once connected, I pressed the button and the search was on! The noise emitting from the pen, whilst quiet, was sufficient to find the pen (even in the hustle bustle of Pen Heaven’s warehouse). I located the pen fairly quickly, with the app indicating how hot or cold I was and the noise combined.

The other way around was trickier. Pressing the button on your trackable device activate the Bluetooth location feature; for the Peerless this is on the upper part of the pen, near the clip.

I left my phone in silent mode to test the other feature of the TrackR technology – phone location indicators which override your phone’s silent mode. Handy when you keep your phone on silent and can’t even ring it to find that it’s fallen down the back of the sofa.

Again, the phone and pen’s Bluetooth connection separated, but a beep from the pen when you try finding your phone indicates this. Once back in range, the pen didn’t make any noise or light up so when I couldn’t hear the phone I began to wonder if it was working properly.

This time around was essentially a failure and I had to have my phone retrieved for me. However, it turns out my colleague had hidden the phone somewhere that even with your ear pressed against, it was really hard to hear. The tracker had worked, I just couldn’t hear it!

Out of Bluetooth Range? 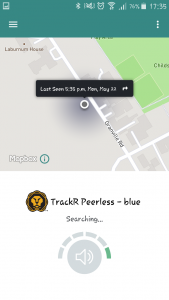 Once out of Bluetooth range, the TrackR community can help you out. Using location services the app logs your devices last known location and will show this on the in-app map.

If another user comes within range of your device, their app anonymously sends a ping and lets you know where you device was last located. (The user doesn’t even know they’ve done it.)

In the Real World

A chunkier pen than I would usually choose to use due to having smaller hands, I none the less found the Peerless comfortable to use when I got used to the larger proportions. Free-flowing ink and a seamless twist mechanism made it a great go to pen during the test period.

It turns out I’m not half as forgetful as I thought and during my test period I only utilised the app once.

I’d been milling around my house all day periodically using my phone. At some point I must have put my phone down because when I next went to use it, I had no idea where I left it. I tried ringing it, but seems I had left it on silent.

It would’ve taken me a good hour of hunting and a lot of stressing to find my phone without the TrackR, so I’m very pleased I had it.

Simple styling and functionality makes the Cross TrackR smart writing tech at its best and you’ll wonder how you managed without it. The app's straight forward design is easy to use and can track multiple TrackR devices at once. The only down side I found was the alert noises were a little quiet, but I could find the device I was searching for none the less. Whether you need to use the TrackR every day or just once in a while it’s a very handy piece of kit to have by your side.

Got a Cross TrackR product of your own? Tell us your thoughts and share your story of how it’s managed to save your pen/phone.