Handwritten Letters Which Made History 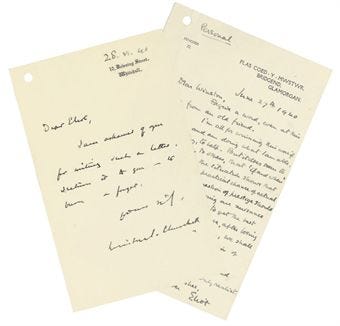 Handwritten Letters Which Made History

Letters have been playing a crucial part in history for thousands of years.

The first ever handwritten letter was thought to have been sent by the Persian Queen Atossa in around 500 BC, according to the ancient historian Hellanicus. Their popularity as a way of sending messages grew as more people became literate.

Although electronic forms of communication have now largely taken over from the handwritten letter, it still holds a place close to our hearts. Research carried out by Pen Heaven found that 64% of people would not sit down and hand write a single letter over the course of a year. But despite this, 69% said receiving something handwritten through the post would mean more to them than a text, tweet or Facebook message.

To mark Pen Heaven’s Handwriting Matters campaign, we have put together a list of important letters where the authors changed the course of history simply by putting pen to paper.

In 1527 King Henry VIII put his royal pen to use writing a love letter to the woman who would go on to become his second wife. What makes this letter particularly interesting is that at the time he was still married – to his first wife Catherine of Aragon, who had failed to provide him with the son and heir he yearned for. 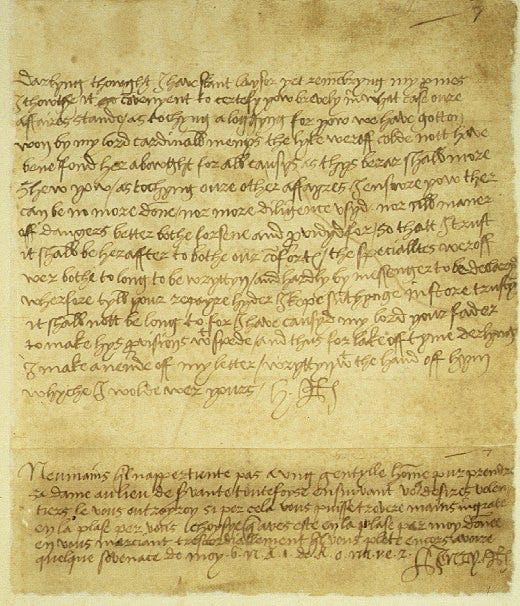 In the letter he talks of the lodgings he arranged for her in London as he doggedly pursued her affections and tried to annul his first marriage.

He wrote: “As touching a lodging for you we have gotten one through my Lord Cardinal's means, the half of which could not have been found around here, for all causes, as this bearer shall more show you. As touching our other affairs I assure you there can be no more done, nor more diligence used, nor all manner of dangers better both foreseen and provided for, so that I trust it shall be hereafter to both our comfort, the specialties whereof were both too long to be written, and hardly to be sent through a messenger.”

Perhaps the most telling part of the letter is the way he ends it, signing off by saying: “written with the hand of him who wishes he were yours.”

Henry VIII’s infatuation with Anne Boleyn changed the religious structure of Britain forever, causing him to break with the Roman Catholic church in 1533 so he could divorce his first wife and marry Anne (who was by now already pregnant) in a secret ceremony. The Pope reacted by excommunicating Henry and the English Reformation began in earnest.

A letter which could have inspired Abraham Lincoln’s signature look

When you think of Abraham Lincoln, you probably think of a top hat and you almost certainly think of a beard. But it seems the 16th President of the United States was once much more clean-shaven.

In October 1860, an 11-year-old girl living in the state of New York wrote to Lincoln to tell him she hoped he would be the next president. 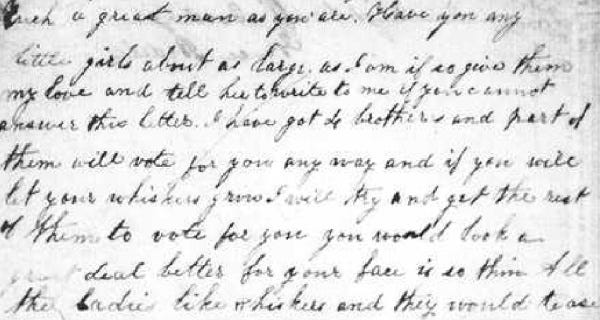 Grace Bedell was inspired to write to him after her father brought his picture home after a trip to the fair. Her letter suggested that if he grew a beard, more people might think he was electable.

She wrote: “I am a little girl only 11 years old, but want you should be President of the United States very much so I hope you won’t think me very bold to write to such a great man as you are. Have you any little girls about as large as I am? If so, give them my love and tell her to write to me if you cannot answer this letter. I have got four brothers and part of them will vote for you any way and if you will let your whiskers grow, I will try and get the rest of them to vote for you. You would look a great deal better for your face is so thin. All the ladies like whiskers and they would tease their husbands to vote for you and if I was a man I would vote for you too but I will try and get everyone to vote for you that I can.”

Of course, we’ll never know for sure whether Grace’s letter was the reason Abraham Lincoln grew his beard but less than a month after receiving it, that’s exactly what he did.

Grace later met Lincoln when his train stopped in Westfield, New York, on his way to his 1861 inauguration. The encounter was reported by the New York World, which said: “Mr. Lincoln stooped down and kissed the child, and talked with her for some minutes. Her advice had not been thrown away upon the rugged chieftain. A beard of several months’ growth covers (perhaps adorns) the lower part of his face. The young girl’s peachy cheek must have been tickled with a stiff whisker, for the growth of which she was herself responsible.”

In April 1963, the Birmingham Campaign began in Birmingham, Alabama, with marches, sit-ins and protests opposing racial segregation. Circuit Judge W A Jenkins swiftly issued an injunction banning any kind of parade or demonstration, a ruling Martin Luther King and other activists ignored. King was arrested on April 12 and sent to Birmingham Jail.

After his arrest, eight white clergymen in Alabama denounced King and his methods in a statement published in the local newspaper. Despite being imprisoned in harsh conditions, King was compelled to write a response. His letter started in the margins of the newspaper where the clergymen’s statement had been published. He then continued it on scraps of paper supplied to him by a black trusty (a prison inmate given additional powers and responsibilities) and on a pad given to him by his lawyers.

The eleven-page letter argued that they could not sit back and wait while the issue of racial segregation was thrashed out in the courts.

King wrote: “I cannot sit idly by in Atlanta and not be concerned about what happens in Birmingham. Injustice anywhere is a threat to justice everywhere. We are caught in an inescapable network of mutuality, tied in a single garment of destiny. Whatever affects one directly, affects all indirectly.”

Following his release from jail, King continued to take part in non-violent protests calling for the end of racism. Just four months after he sent his letter from Birmingham, he took part in a march to Washington DC and delivered his world famous ‘I have a Dream’ speech in front of the Lincoln memorial.

Charles Darwin was a prolific letter writer. He exchanged no less than 1,400 letters with his closest friend, the botanist Joseph Dalton Hooker.  In January 1844, Darwin wrote to Hooker that he was starting to become convinced that species were not “immutable”. He then goes on to say that the idea that animals can change over time was almost like “confessing a murder”. Fifteen years after this letter was sent, Darwin’s book On the Origin of Species, a publication which really would change the way people saw the world. 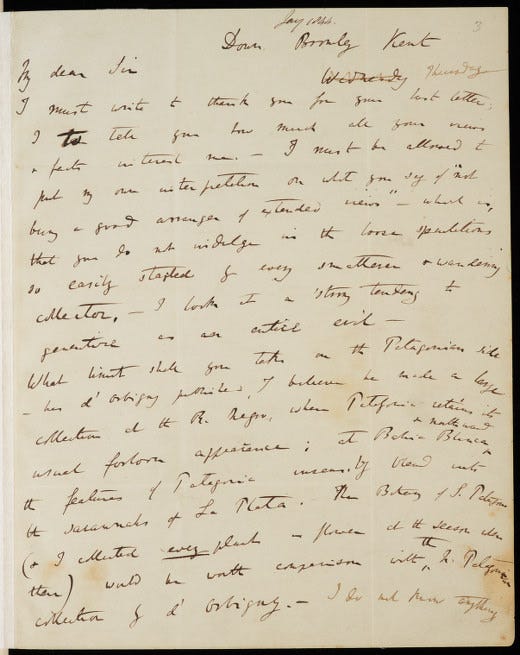 In his letter to Hooker, he wrote: “I have read heaps of agricultural & horticultural books, & have never ceased collecting facts — At last gleams of light have come, & I am almost convinced (quite contrary to opinion I started with) that species are not (it is like confessing a murder) immutable. Heaven forfend me from Lamarck nonsense of a “tendency to progression” “adaptations from the slow willing of animals” &c, — but the conclusions I am led to are not widely different from his — though the means of change are wholly so — I think I have found out (here's presumption!) the simple way by which species become exquisitely adapted to various ends. — You will now groan, & think to yourself ‘on what a man have I been wasting my time in writing to.’”

Winston Churchill’s refusal to make a deal with Germany

When Winston Churchill became Prime Minister in May 1940, he was almost immediately put under significant pressure to make a deal with Nazi Germany and end the war. His own assistant private secretary Eliot Crawshay-Williams wrote to him saying he thought Britain should use its “nuisance value while we have one to get the best peace terms possible. Otherwise, after losing many lives and much money, we shall merely find ourselves in the position of France — or worse. I hope this doesn’t sound defeatist; I’m not that. Only realist.”

Had Churchill listened to this letter, the course of British history would have been completely different. Instead, he responded with his own handwritten letter. This note simply said: “I am ashamed of you for writing such a letter. I return it to you — to burn & forget.”

Despite this advice, the letter was not burnt and it was sold along with Churchill’s reply for £34,850 at an auction at Christie’s in 2010.

Your handwritten letter may not change the history books, but it could certainly brighten someones day.