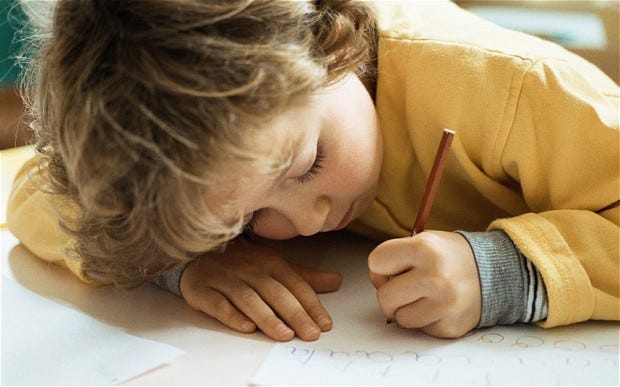 So iPads are taking over and kids today can no more hold a pen than milk a cow. At least, that’s what some would have you believe. There’s no shortage of articles deploring the worsening state of children’s handwriting, blaming “growing reliance on computers and poor teaching." Meanwhile, as we read news from America about the removal of cursive handwriting as a mandatory requirement for schools, one could be forgiven for thinking that the end is nigh for the pen as an educational tool. But is this really the case? Pen Heaven spoke to four experts to see just what’s happening to handwriting in British schools.

To tackle the most damning allegation head on, Pen Heaven went straight to the source: teacher blogger Kenny Pieper.

“In my experience as a secondary English teacher, I see some wonderful handwriting from eleven-year-olds, really beautiful, as well as the poor stuff. There are a whole load of issues at play and it is often too easy to blame primary school teachers.” And in all fairness, handwriting isn’t easy to teach. We spoke to Dr Angela Webb of the National Handwriting Association.

“The majority of teachers feel they lack the necessary skills to teach handwriting - hence the need for the service training programme that we offer.” Melanie Harwood of Start Bee Writing Wizards, an organisation which runs after-school handwriting classes in London and Hertfordshire, also pointed how much pressure teachers are under.

“We cannot blame declining interest in schools at all. Teachers are doing the best they can and have very large class sizes to contend with. There’s a full curriculum to get through and sometimes there just isn’t time to provide the one-to-one tutoring that handwriting requires with so many children.”

The curriculum is full indeed. There are now, however, a total of 12 subjects compared to 10 in 1999. Every primary school child must now study a modern foreign language and computing. By the age of 11, pupils will be able to “design, use and evaluate computational abstractions that model the state and behaviour of real-world problems and physical systems." So while a comparison of the most recent primary school National Curriculum with that from fifteen years ago shows little substantial change with regards to handwriting itself, perhaps there’s a risk that handwriting – and perhaps many other subjects – are being crowded out. Melanie Harwood reports, however, that authorities in the UK have actually taken steps to drive up standards.

“At a recent education event, OFSTED inspector and education consultant Mary Myatt advised the attendee head teachers of a new directive. OFSTED inspectors are now going to be checking each individual child's books to ensure they are achieving the handwriting skills required for their age ranges. Children are now required to be writing cursive by the age of seven.” As long as this is done sensitively, Pen Heaven is welcoming this as change for the better.

So now that computing is a primary school subject its own right, could it be said that the digital age is rendering handwriting redundant? School governor Sarah Wood, who also runs the hugely popular Mum of Three World blog, shared with us her experiences with her own children.

“My eldest son’s handwriting has been an issue for us since he was tiny. He's now in year 9 and his English teacher is concerned his handwriting will affect his GCSE results - it really is that poor! I know that once in the 'real world' he won't need handwriting, as he can do everything on a computer, but right now you can't do your GCSEs on a computer, so he needs to be able to write legibly.” In cases where students have had the option to use computers in exams, however, uptake has often been remarkably low. And while it is true that the keyboard is now more prevalent than the pen in the workplace, the transition has so far not been absolute. Start-Bee Writing Wizards are often approached by adults who find that they need to improve their handwriting for the sake of their careers. “We had one young man in his early twenties attend a Start-Bee handwriting club, and his goal in life was to be able to write so that he could fill in the written application form to join the Royal Navy. Within mere months this young man had gained the confidence to apply for his dream job and he was accepted.”

Recently, tech developers have begun designing handwriting apps for schools. Though they’ve proven popular, they’ve not taken over altogether – something which seems to be down to the sheer innate suitability of the pen as an educational tool. Kenny Pieper tried using the Penultimate iPad app in his own classroom.

“I’ve always used the ancient overhead projector to write collaboratively with my classes. Penultimate was an attempt to do this while saving my work onto the iPad. However, I felt that the screen was too limiting and the stylus did not give me the control and freedom I need to chop and change, correct and scribble over. I have returned to the overhead projector, proudly, as it serves me well.” This came as no surprise to Pen Heaven. We’ve blogged before on the cognitive and creative benefits of writing by hand, and described how “writing with a pen and paper helps to rid you of the distractions of the digital world.” As Dr Webb says, “well-designed apps can be a useful additional resource for practising letter forms but will never replace face-to-face teaching using pencil on paper.”

So how do children feel? “My eldest son loathes handwriting and doesn’t see what all the fuss is about”, says Sarah Wood. “The younger two write beautifully, but they aren't particularly bothered either way. They just take more pride in all of their work than their brother.” In truth, when we think back to the struggles we had with certain subjects at school, the words “what’s the point!” were on the tips of our tongues.

The answer to this stumbling block, where it occurs, is to keep lessons relevant – and one can’t help but wonder if the reports of the appalling state of children’s handwriting are, in fact, laments for the bygone era of copperplate script. As the world changes, all the evidence clearly shows that the pen still has a role to play. The creative freedom it offers to the writer makes it crucial for classrooms and exam rooms; it continues to find applications in the real world; and educators and authorities alike are taking steps to reaffirm the importance of handwriting and keep its head above water. So whatever threats handwriting may face in the modern world, in British schools at least, it appears to be holding firm.

Kenny Pieper is an English teacher, writer and blogger. He's written extensively on the importance of handwriting and his blog, https://justtryingtobebetter.net/, is a must-read for anyone interested in teaching and education.

The National Handwriting Association is a charity which aims to raise awareness of the importance of handwriting, promote good teaching practice and support those who work with children with handwriting difficulties. Find out more at https://nha-handwriting.org.uk/.

Sarah Wood is one of the biggest mummy bloggers on the block - and also happens to be a school governor. For funny, interesting, informative and thoughtful reflections on raising school-age children, visit her blog https://mumofthreeworld.com/.

Start-Bee Writing Wizards is part of Start-Bee After School Clubs, an organisition which provides support in a wide range of subjects in schools across London and the South-East. They also work with adults, and you can find out more on their website https://start-bee.com.