The Election Candidates Exposed – Their Handwriting Reveals All 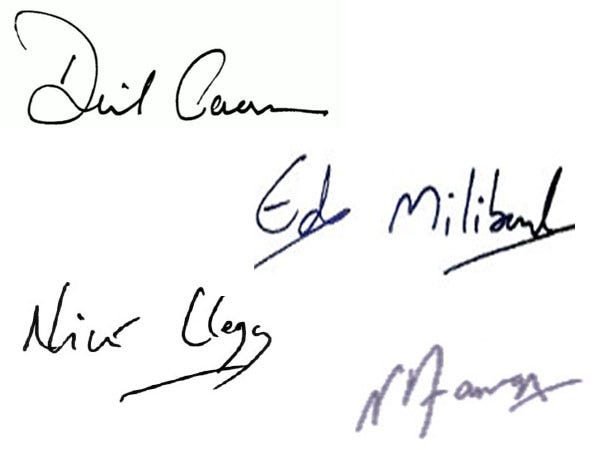 The Election Candidates Exposed – Their Handwriting Reveals All

As the party manifestos come out, we would like to know what is really going through the leader’s minds. For the first time they have nowhere to hide as we have their hand writing analysed, helping you see the person behind the decisions!

We asked two expert graphologists, Elaine Quigley and Diane Simpson, for their analysis of the four main candidates; David Cameron, Ed Milliband, Nick Clegg and Nigel Farage. The results are not always what you might expect, and we would like to think it may help sway your decision on May 7th.

It’s clear from David’s handwriting that he is supremely confident. Elaine notes, “…all but Cameron, have a short line under their signatures, accentuating their importance. Cameron has a signature that stands on its own merit, indicating that he has the confidence to just be who he is”. The right slant of David Cameron’s handwriting also suggests that he is more outgoing than, say, Ed Milliband whose handwriting slants only towards the right hand side of the page.

Alongside this confidence, his signature suggests an informality and openness. Diane explains, “the size of capital letters in his signature are greatly emphasised ...especially the first letter of his first name. Writing is communication like speech ...so he is drawing attention to his first name“.

But is this the full story? Diane continues, ”The first letter of his last name is also far larger than the rest of his writing (but nowhere as large as in his first name) so he isn't trying to appear entirely informal”.

Elaine noted David’s signature is a little hard to read (more so than Clegg and Milliband). She says this reveals he has a more secretive side, and is “more adept at keeping council than the second two. He probably is more aware of how to avoid getting involved before he is ready”. So he is perhaps not quite the open and candid person he would like us to believe.

“Here we have a confident goal orientated individual, quick thinking, logical and far sighted ...but seems to be trying to appear more adaptable than he actually is.”- Diane

Ed reveals some very ‘personal’ personality traits from his handwriting. Firstly Elaine notices that whilst Cameron and Clegg have a right slant showing confidence, Ed’s slant only appears towards the right hand side of the page. ”This tells us that the first two are more naturally outgoing than Milliband, who summons up his ability to go towards people, when he needs to do so”.

Ed reveals he is a sensitive soul through his writing. Elaine explains, ”The lower zone which reflects needs and emotions, is more indicative of feelings, is more pronounced in Milliband’s writing than the lower zone in the other two samples (Clegg and Cameron). He tries to strive to get in tune with others, but having a lack of real understanding of what people are about, with the best will in the world, he doesn't seem to be able to get on people's wavelength”.

Looking at Ed’s signature, Diane spots that his, “signature lacks flow with the result that it looks rather disjointed (if it was the spoken word it would lack flow and seem rather jerky”. Having said that, his signature is clearer than Cameron and Farage, suggesting he is more open and quicker to get involved in matters than the others.

There is an underlying sense of insecurity coming from Ed’s writing. Diane says, ”As soon as he wrote his first name he felt the need to underline it, Make no mistake I'm ED, and then came his last name which he also felt the need to add emphasis to (not any old Ed but THE ED MILLIBAND”. But we also get a sense of Ed’s personal ambition, “His upper strokes reach for the sky and in the case of his last name even higher than the capital letter.... this Miliband is trying hard to ensure he is on his way up!”.

”Here we have an intuitive but apparently insecure individual who is trying very hard to do the 'right thing' ….this scenario is often caused by conflicting advice coming from all sides with ensuing confusion”- Diane

Like David Cameron, Nick’s right slant shows a feeling of self-confidence. More interestingly, from his handwriting we can deduce that Nick is keen to act more quickly on matters than the others. Elaine says, ”Within the script there are differences in the i-dots, with Cameron and Milliband being precise with the dot immediately above the stem and Clegg placing his dots a little ahead of the stem. He’s the one who likes to be quick off the mark.”

It’s clear from his signature that image is very important to Nick. Diane highlights that his signature is underlined, beginning under the end of his first name and extending under his last name, ”here is a writer who is revealing a need for status. Again there are enlarged first letters but this time with the initial letters of both names being markedly larger than the rest of the words , as though he was making sure that the reader was very sure that this was HIS writing”.

”Here we have a determined, quick witted individual who is working on his image (patching as he goes). Goal minded in the extreme he seems to be investing all he has got in what is yet to come and at the same time adding what he believes to be necessary to his Public Image.”- Diane

Unfortunately we could only find the enigmatic Nigel’s signature, but it is very telling. Elaine says, ”Farage has a more indistinct signature than the other three, possibly because he is something of a law unto himself and doesn’t want to be a conformer. His signature also has more angles, showing a combative streak. The other signatures are not as aggressive as Farage. He's more likely to speak out rather than wrapping his comments with tact. His indistinct signature also suggests a more secretive manner, similar to Cameron.”

Surprisingly though, we can deduce some positive attributes. ”Farage has a signature which rises as though he is presenting a consciously positive ‘can do’ message”, says Elaine. ” “Again the thrusting capitals ...a pointer to goal orientated ambition”, says Diane.

”Here we have quirky yet formal individual whose view of what is right is very clear. Logical and exacting his intent is finish what he started!"- Diane

Elaine Quigley is a psychologist and past chairman of the British Institute of Graphologists, offering advice for staff selection, counselling, lecturing, exhibition presentations, public speaking and TV, Radio and newspaper articles.

Personality Profiler and authoress, Diane Simpson FRSA, has written three books and many articles, worked on high profile investigations and appeared on more than 200 television and radio programmes.

Revive a dead ballpoint pen with these 2 simple tricks May 24, 2012
Latest