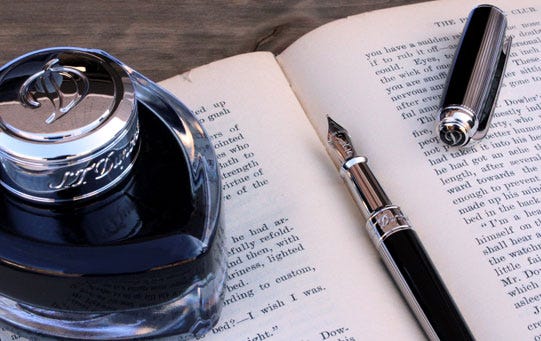 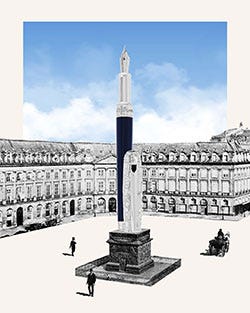 There are few manufacturers in the world today with a pedigree quite as majestic as S.T. Dupont. Founded in 1872 by 25-year-old Simon Tissot-Dupont, the young leatherworker - who’d first cut his teeth as a photographer for none other than Napoleon III - set up shop following the demise of his previous business, a carriage company which burned in a fire that same year. Dupont began to make a name for himself after his luxurious personalised travel trunks became a must-have accessory among the European aristocracy. By 1884 the company was well-established for its exceptional quality and high-class status, and became a supplier to one of the world’s largest department stores, Les Grands Magasins du Louvre.

Dupont Snr remained in charge right up until 1919 when, after almost 40 years at the helm, the company was handed down to his two sons, Lucien and André Tisson-Dupont. Building upon their father’s innovations the brothers began to push things in new directions, beginning with the relocation of the factory from Paris, in the north, to Faverge, Haute-Savoie, in the south-east. They also developed a range of new manufacturing techniques for their products, many of which are still used by the company today. These include a tanning technique using diamond powder that gives the leather exceptional weather-resistant durability, and a highly coveted metal lacquering technique from Asia, the secret to which S.T. Dupont guards closely even now. 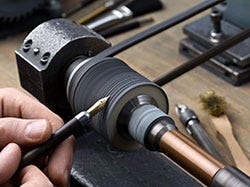 With credentials such as these it is unsurprising that S.T. Dupont have enjoyed the custom of many of the world’s most elite figures. During the Second World War, they produced the world’s first ever luxury petrol cigarette lighter, counting the Maharaja of Patalia among its very first owners. A few years later, specially commissioned travel trunks were designed and manufactured for Hollywood legend Humphrey Bogart and - in celebration of her marriage to the Duke of Edinburgh - Queen Elizabeth II. Even more exciting - for us at least! - was the creation of the Classique S.T. Dupont, a luxury ballpoint pen, at the behest of Jackie Kennedy Onassis in 1973.

Today, the artisans at S.T. Dupont continue to channel this incredible lineage into each new product. Specialising in fine engraving, lacquering and leatherwork, and making use of only the finest precious metals and up-to-date technologies, they produce a range of exquisite luxury pens with fountain, rollerball or ballpoint nibs. 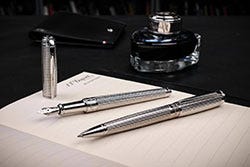 For those new to the brand, try their entry-level D-Initial, a weighty all-metal design with an elongated pocket clip and sleek modern silhouette; or the flagship Line D with palladium-plated trim and a rhodium-plated 14 karat gold nib. For something a little more extravagant, the Sword model - inspired by Edward Bulwer-Lytton’s famous quote, “The pen is mightier than the sword” - features a pocket clip in the shape of a dagger, gold trim and a glossy lacquer blending from black to gold down the length of the tapered barrel. Or, for a more elegant instrument, try the Liberté with subtly flared barrel and designs that feature bevelled diamond detailing on the cap. Whichever range you chose, you can look forward to holding a work of real beauty that writes with precision and comfort. Still going strong after almost 150 years - S.T. Dupont, we salute you!